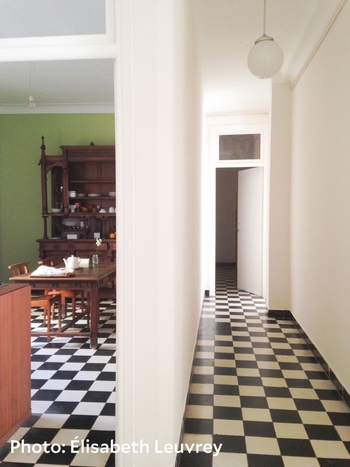 On Christmas day I flew to Algiers. I always stay with friends in a fourth-floor apartment in the old rectory across from the grand El Rahma mosque. Over the front door the anachronism “Presbytère” is spelled out in gold-flecked 1930s mosaic tile. Priests from the Église Saint Charles once lived here; we’ve adapted their ecclesiastical furniture for our kitchen cupboard: in front of the bathroom, their confessional screen has become a lovely perch for hand towels. We call our apartment La Maison Dar: the House House (dar in Arabic = house), and La Maison d’Art: the Art House. I find the sparsely furnished spaces calming, conducive to writing. My own room, decorated only with a table, a desk, and a cupboard, has high ceilings and cool black and white tile on the floors. When I’m in New Haven, I imagine myself in the Maison Dar, at my desk, looking out the vaulted windows onto the balcony, hearing the call to prayer from loudspeakers so close I can almost touch them.

I’ve begun to write about the Algerian painter Baya (1931–98), trying to fathom the circumstances that made her a star of the post-war Parisian art world. Accounting for the cost of that stardom, investigating her supporters, the light they cast on her work, their shadows, too.

She worked on a flower farm on the outskirts of Algiers, lived in the home of a French woman, Marguerite Caminat, and her English husband; her work was then exhibited by a Paris gallery owner, and the rest is history. That’s the brutally short version, which makes no room for the context in which she came of age: The Liberation and the twilight years of colonial rule in Algeria. France free at last after four years of Nazi occupation, blind to the signs of revolt in an Algeria it had occupied, and subjugated, for over a century.

I’ve scanned into my computer the notes and correspondence that Marguerite Caminat left to the colonial archives in Aix-en-Provence. Marguerite’s handwriting is hard to decipher, and a flood in her house means that some of the pages she gave to the Archives nationales d’outre-mer are smudged. She’s underlined passages in red—messages to herself, and now to me. Here is where she wanted me to pay attention. I’ve decided that the red passages are notes for a book she intended to write, but didn’t, after she retired from her work as an archivist at the Maeght Gallery. Facing her undecipherable handwriting, I was constantly perplexed, wondering when she wrote, or when she transcribed what she’d once written, or when she gave up on the project: some of the stories of Baya’s childhood seem to have been recorded on the spot, other pages, such as a chronology of Baya’s life, read as though they were created with several decades of retrospection.

In some ways this is work I do alone, but in so many ways I do it thanks to the Whitney and my colleagues in the humanities. A conversation at the lunch table with a Whitney fellow will open my mind to a new method: Lucy Mulroney from the Beinecke on how she went about finding missing persons who leave no traces; Liliana Milkova from the YUAG who told me to reach out to her colleague Antonia Bartoli on provenance and spoliation, who opened a whole world of inquiry; Joanna Fiduccia in History of Art with her work on Giacometti and interwar ideologies; Mike Printy who led me to the owner of the flower farm via RetroNews. When I’m not working on Baya, I’m reading an amazing set of graduate papers on literature and the archives, each of them grappling with reliability and unreliability, with the physicality of their objects, with what they hide and what they reveal. I think about my conversations about art with Emily Bakemeier, my talks about the Monique Wittig archives with Morgane Cadieu, my ongoing thinking about Algeria with my colleague Jill Jarvis, and with Walid Bouchakour, whose dissertation we co-direct, and who has taught us so much about his country.

This is our purpose at the Whitney: to create a space that allows us to thrive intellectually across the humanities. We might not realize until years later that it was an exchange of ideas after a lecture or a passing conversation at a fellows’ lunch or a recommendation of an article that allowed us to pursue a new field, to go deeper in a field we thought we knew, to work in a new language or period or country. You can’t measure these outcomes. Yet this is what we strive for.

From the Director Archive