The Whitney Humanities Center welcomes author Sheila Heti as our Fall 2022 Franke Visiting Fellow. She is the author of ten books, including her most recent novel, Pure Colour. During her semester at Yale, she will be working on her next novel. She is also co-teaching, along with Noreen Khawaja, associate professor of Religious Studies, an interdisciplinary seminar “Fate and Chance in Art and Experience.”

Sheila Heti, "What Is a Process?" 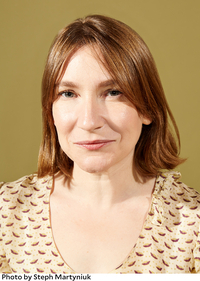 In her public lecture, “What Is a Process?” novelist Sheila Heti, our Fall 2022 Franke Visiting Fellow, invites us into the processes she uses in the writing of her books—both the expected and the unexpected. She offers a glimpse into the novel she’s currently writing while she’s with us here in New Haven, and speaks about the role of collaboration with other people, and other domains, in the shaping of her ideas.

Sheila Heti is the author of ten books, including the novels Pure Colour, Motherhood, and How Should a Person Be? She recently published her second children’s book, A Garden of Creatures, illustrated by Esmé Shapiro. She was named one of “The New Vanguard” by the New York Times; a list of fifteen writers from around the world who are “shaping the way we read and write fiction in the 21st century.” Motherhood was chosen by New York magazine and the critics of the New York Times as the Best Book of the year, and How Should a Person Be? was named one of the 12 “New Classics of the 21st century” by Vulture. Her nonfiction collaboration Women in Clothes, which includes the words of 639 women from around the world, was a New York Times bestseller. She is the former Interviews Editor of The Believer magazine, and has interviewed many writers and artists, including Joan Didion, Elena Ferrante, Agnes Varda, Sophie Calle, Dave Hickey, and John Currin. Her books have been translated into twenty-five languages. She lives and works in Toronto.