THE STONE HEADS OF 320 YORK

As you enter the new Humanities building at 320 York Street—the Humanities Quadrangle, or HQ—you might notice twelve stone heads looking down at you from the arched entrance. Although the heads’ exaggerated ears suggest a certain looseness with anatomical detail, the specificity of the faces suggests they represent real people. At the Whitney Humanities Center, we decided to try to identify the faces. Yale’s own promotional material tells one story: a brochure detailing a walking tour itinerary of the campus claims that “the archway is decorated with carved heads not of scholars but of the construction staff.” Was this true? It seemed likely—in fact, the Hall of Graduate Studies (as 320 York used to be called) was in the news in the 1930s when it was discovered that, as the New York Times put it, “Yale Buildings Exalt Humble.” The paper reported that stone carvings in the courtyard of the Hall of Graduate Studies were intended as portraits of the workmen who helped build it. This followed close on the heels of a scandal that, according to the December 1934 Shouts & Murmurs section of the New Yorker, caused “titters at Harvard” and “evidence of pretty confusion at Yale.” What had happened was that a cryptic passage carved into the face of the Hall of Graduate Studies had been discovered to come not from a scholarly source, but from a contemporary novel, Rafael Sabatini’s Scaramouche. The discovery that the stone portraits next to this inscription “are not portraits of famous Yale professors,” as the New York Times put it, but of architects and construction company employees, felt like the last straw.

But the heads embedded in the entrance archway were not mentioned as part of that initial scandal. So we did some digging in the Beinecke Library’s archives and found a typewritten account by one of the workmen involved in the planning of the building, Wesley Needham. 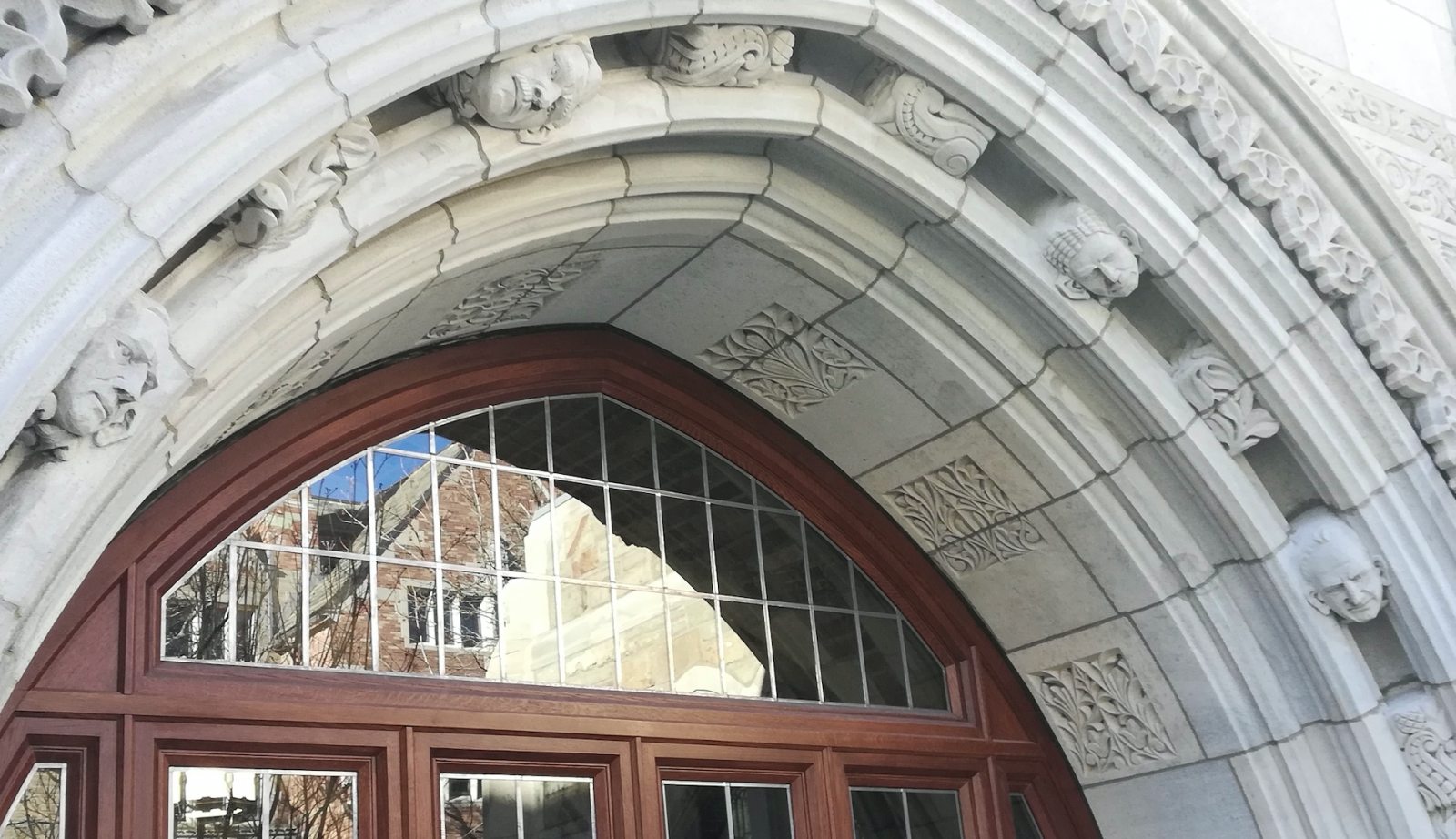 Needham was quite a character. He served as an adviser in Tibetan literature at the Yale University Library and had no training in architecture except “through the study of books on architecture borrowed from the New Haven Public Library.” Nonetheless, he served as a draftsman in the construction of 320 York Street as one of what he estimated as about eighty-five draftsmen serving under the chief architect, James Gamble Rogers. These people drew up plans and created drawings of proposed carvings, which they submitted, in the case of the Hall of Graduate Studies, to the architect John Donald Tuttle for approval. Needham recalled working on a “series of snails” to be molded over the windows in the lounge: “Tuttle didn’t mention what they symbolized (possibly the slow pace of graduate students on their way to a higher degree),” a surprisingly painstaking project that went through a number of drafts. Needham dryly comments, “Now when I look at them, I wonder if they were worth so much effort.”

The draftsmen were thus the experts on the stone carvings that adorn 320 York Street to this day, and Needham states authoritatively that the carved heads on the archways represent the draftsmen themselves: “Bohan, Berg, Callison, Heery, Hocker, Hogeboom, Maguire, Murray, Needham, Turner, van Rijper, and one other whose name I cannot recall.” Although we did not have much luck finding pictures of most of these men, we do know that the one at the top left here is Needham: 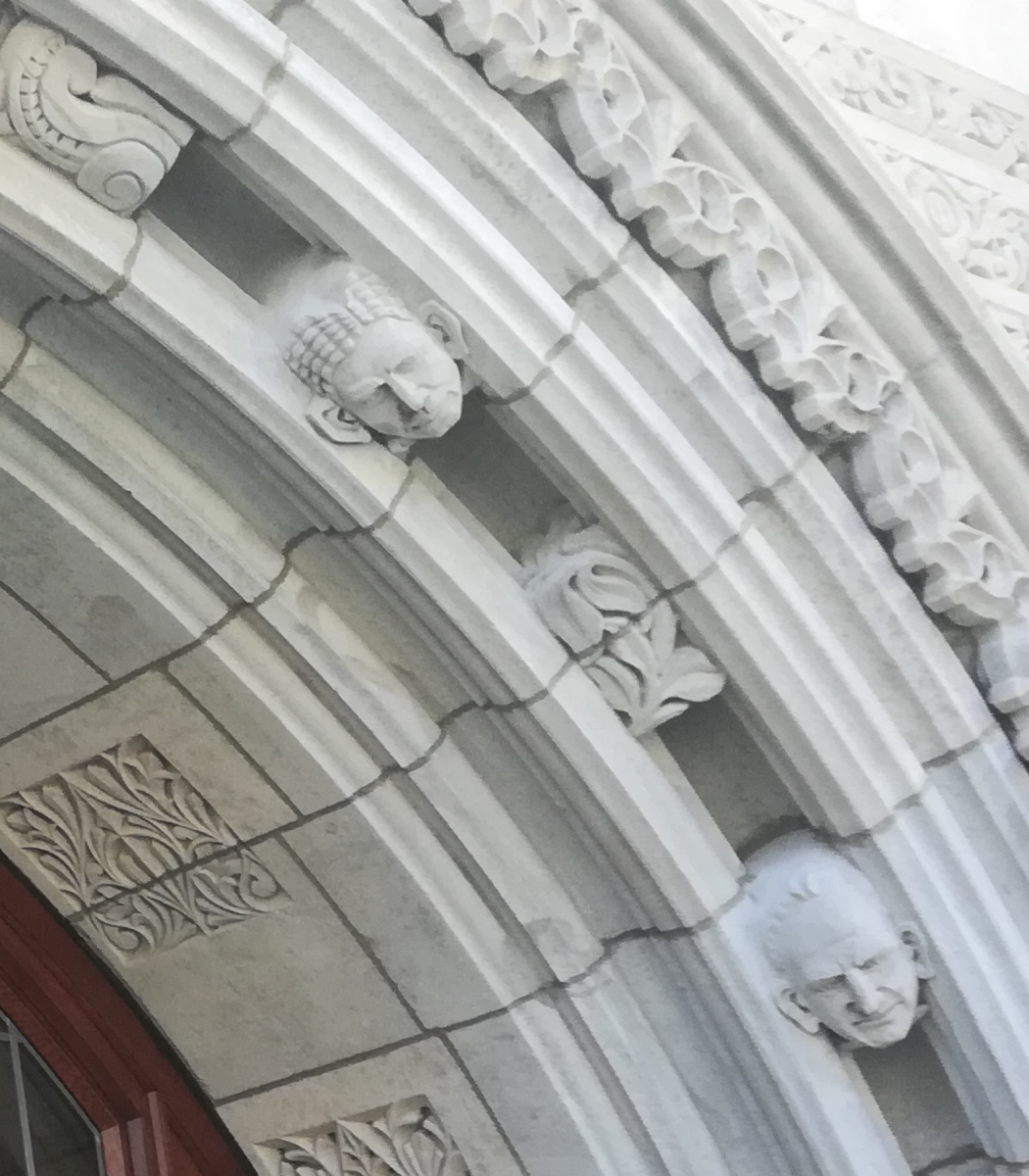 The other head pictured, according to Needham, portrays Van Rijper. Van Rijper drew “The open pulpit, adjoining niche, and windows at the base of the tower in the Main Court” as well as “the niches in the corners” of the tower. Of the other men, Needham mentions that “Bohan made the drawing of the York Street entrance near Tower Parkway” and that “Callison worked on drawings of ornamental details for the tower.” As for the heads, Hocker was responsible for those.

Although it’s technically true, then, that these heads represent men responsible for the construction of 320 York Street, the story is more complex than that. In fact, the heads represent the brains behind that building’s complex and self-referential ornamentation. As you enter the building, they dare you to try to figure out all the strange details and hidden references in the building’s architecture. Ultimately, and fittingly for a Hall of Graduate Studies, they urge those entering to engage in research, promising that the truth awaits those who look for it.

Clio Doyle is a postdoc in the English department at Yale. She works on stories about the invention of agriculture in medieval and early modern literature.