For some cinephiles, this screening offered a first glimpse of the Alice Theater, the state-of-the-art screening room in the Humanities Quadrangle. If many in the Saturday afternoon audience anticipated a vibrant 35mm print, they were greeted with faded, rose-tinted images. “We might have seen the last screening of this print,” remarked Carlos Valladares, Films at the Whitney curator and PhD candidate in the History of Art and Film and Media Studies, as he consulted with Yale’s beloved, longtime projectionist Tony Sudol after the event. It is not uncommon for pre-1970 prints to take on a purplish tone: the cyan and yellow dyes tend to fade, leaving a film with only its magenta layer. The magenta tones remind us of the materials a film print comprises, materials that decay over time. A print’s retirement is a sign of respect for this materiality—an act that honors the history of the film. 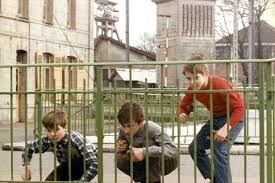 In conversation with Truffaut’s Les quatre cents coups (1959, The 400 Blows), Pialat’s L’enfance nue spares little in its pitiless depiction of the child welfare system. Yet it manages—possibly to the detriment of its own reception—the discomforting feat of remaining thoroughly unsentimental. The film follows a tight-lipped, aimless ten-year-old boy named François Fournier (Michel Terrazon) who has been in foster care since he was four years old. Over the span of 83 minutes, the audience sees François being shuffled from one home to another until he is finally sent to an off-screen observation center for juvenile delinquents. Caring and engaging at times and exceptionally vindictive at others, François is hard to read and nearly impossible to judge. What sets Pialat’s case study against its New Wave predecessors, including Truffaut who co-produced the film, is the camera’s resolute refusal to seduce the audience with any close-ups or background music, as well as its perceptible disdain for false identification and narrative embellishment. François’s childhood is not a repository for the memories or the hopes and fears of adults; it is the experience of a fledgling child who has been denied any semblance of constancy. L’amour existe, Pialat’s earlier black and white film essay on Parisian urbanization, underscores a similar concern, presented in a stark, documentary style.

Given the condition of the color print and the fact that both films are available on the Criterion Channel, it seems reasonable to question if the screening was indeed necessary. Why gather with others to watch a film in a theater? To this, Carlos Valladares gave a simple, insightful answer: “Watching in an enclosed setting, on a screen as big as you can get and with a group of people, you are no longer in control of when you start and stop a film. You cede the control over to the director or the projectionist.”

In a movie theater, we learn to give our attention to what is put right before us, even when it is far from the rosy picture that we might desire.

Xinyu Guan is a PhD student in French whose research focuses on early twentieth-century and postwar French literature, film, and cultural history. She also works for the Whitney Humanities Center as a Graduate Professional Experience Fellow.