The hands are all over. Some are working: measuring a length of thread, tightening a vise, reaching to pull someone else up by the hand. Others are feeling—dismay, shame, vulnerability. Some are praying. All convey an intimacy that invites the viewer in to Susan Clinard’s new exhibition, Places We’ve Been.

On view at the Whitney Humanities Center through June 19, Clinard’s sculptures are intended to invoke our common experience. The work, she writes, “offers points of time from our shared human narrative: the recent Californian fires, last week’s bedroom whispers, voices of women protesting, a farmer’s labor, the recent travel ban, love throughout time, a prayer for the shooting in Pittsburgh… The list goes on and on.”

But, really, none of that needs to be said because of all those hands. Clinard manages to make that highly visible part of our anatomy a stand-in for everything else that binds us together as humans. “I’m probably obsessed with them,” she says with a laugh. “I catch myself staring more at people’s hands than their faces… [They’re] more honest, in a way.”

In Our Song (2015), hands and faces are arrayed in a shadow box like a multigenerational choir, their mouths open in unheard song. It’s not clear, however, that they’re singing together. Each set of hands seems to express a different emotion. One pair is splayed open with exuberance, another clasped in solemnity. A third is relaxed and fluid, as if conducting. The central figure, perhaps the eldest, is not singing, but listening, his hands hung low, one clasping the wrist of the other.

Voices of Women (2018) is made up of more faces and hands, with bodies formed or merely implied by unexpected shapes: a shallow box, a column pocked with drill holes, a pegboard. These women, like the choir, seem to be communicating different thoughts, feelings and messages. One shades her eyes as she searches the distance. Another seems focused on twisting the handle of the vise that is her body, though up close, you can see her eyes glancing sidelong as if she’s watching out for someone. Yet another woman lifts her head in supplication. Despite their varied postures, it’s possible the accumulation of their voices does add up to something harmonious. Clinard says she created the piece during the Kavanaugh hearings last fall. Stand before them, gazing into their faces, and listen.

It’s hard to stand among Clinard’s hands and faces and not hear voices alongside the literal sounds of water dripping in a nearby kitchen, the heater rattling, traffic passing. While a few of Clinard’s titles suggest the human voice, the postures of those hands and the expressions of those faces imply a cacophony of human sounds, filling the room with nearly heard speech, cries, wails, mumbles, song.

Even the closed-mouthed figures seem to be holding back something they wish us to hear. In the exhibition’s largest piece—History Repeats Itself: Travel Ban (2017)—the message is clear. The president’s 2017 attempt to block refugees and immigrants from several majority-Muslim nations is merely the latest in a historic string of similar bans, this piece reminds us. Larger-than-life-sized figures of an African man with a child, a Japanese woman, a Muslim woman with her baby on her back and an elderly Jewish man wearing a yellow star on his sleeve remind us of that historic repetition. It’s only appropriate that their lips are all closed. They have no voice. A fifth form, a man with hands at his side, may be us. Could we be next?

In the case of other works in this exhibition, the messages being conveyed both between the figures and from the art to us are less straightforward. In Gossip (2016), one of several wire sculptures, one figure holds its hand to the ear of another as if whispering a secret. They’re almost in motion, rotating around the circumference of a wheel whose spokes are made of other secret-concealing hands and whose hub is shaped like the pit of a fruit, dark and hairy like a rumor.

Continuum #1 and #2 (2015), too, shows secrets being conveyed, but these appear to be family secrets, perhaps the wisdom passed from mothers to daughters through generations. Two mothers—one black, one white—shield their words from us with their hands as they pass them along to their young daughters. The older women press their hands against the divider of the box that displays them, unable to connect, straining to listen, as if wondering whether their lessons will be passed along faithfully.

Clinard describes herself on her website as “a contemporary figurative sculptor most concerned with honesty”—not only to the subject matter, materials and process of the art, but also to herself as an artist. She came to Connecticut in 2007 from Chicago, where she had been teaching stone carving and sculpture classes and exhibiting her work citywide. Today, she’s artist-in-residence at the Eli Whitney Museum in Hamden, where she works from a studio in the museum’s old barn, a space that has influenced her work both literally and figuratively.

Found objects gifted to her by the museum and incorporated into some of the sculptures now on view include pieces of old tools, scraps of wood, discarded boxes and the parts of a grand piano no longer in working order—“old, gorgeous objects that were once functional,” which Clinard says she turns into sculpture as a way of “honoring the fine craftsmanship of woodworkers and builders throughout time,… giving them a second life, so to speak.” Boxes are a repeated trope of her work as well. Many of Clinard’s sculptures are housed in trays, like drawers pulled out to display the intimate contents within. Most are labeled “mixed media,” but wood is the primary element, organic like us.

Perhaps most unusual in the context of all these pieces is the striking installation Kinetic Journey Boats (2018), in which three fragile boats made of coated paper and sticks carry figures across the air flow rising from a heating vent. One boat bears a man, one a woman, and the third a woman with a child. All are headed in the same direction, but they’re carried by the whims of the current, wobbling as if they might tip. No one has an oar.

It’s yet another expression of the human experience we all share: a journey we’re all traveling now, alone in our own boats, but beside one another. 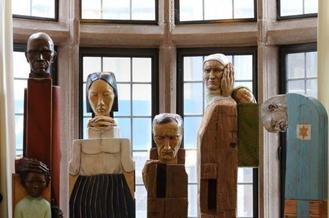 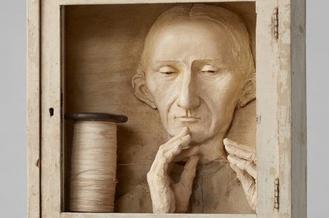 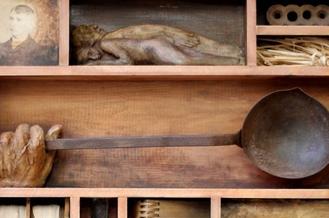 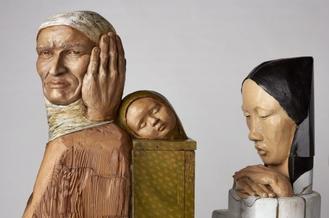 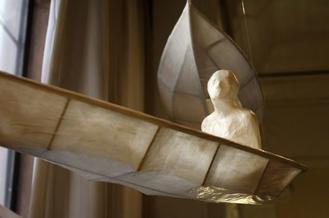