1968 was a year of exceptional political and social unrest and transformation. It saw waves of political protest across the globe–in Brazil, Czechoslovakia, France, Mexico, Northern Ireland, Poland, Senegal, South Africa, Spain, and the US– sparked variously by calls for civil rights, economic, social, and racial justice, and an end to authoritarianism, colonial exploitation, and the war in Vietnam.

The current exhibit draws on holdings in the Beinecke Rare Book and Manuscript Library to provide glimpses into this tumultuous year from the vantage point
of two key cities: Paris and Berkeley. The exhibit offers a selection of protest posters and flyers from the Philippe Zoummeroff Collection of May 1968 (Paris) and the Leon F. Litwack and Emery Douglas collections (Berkeley). The exhibit follows last spring’s course 1968 @ 50: Architecture, Art, and Cultures of Resistance around the Globe taught by Craig Buckley (History of Art), Eeva-Liisa Pelkonen (Architecture), and Kevin Repp (Beinecke). We offer it in conjunction with the Whitney’s Humanities/Humanity workshops 1968 and the Languages and Legacies of Liberation led by Rüdiger Campe (German), Michael Denning (American Studies), Moira Fradinger (Comparative Literature), and John MacKay (Slavic Languages and Literatures).

The Whitney Humanities Center is particularly grateful to Kevin Repp and the staff of the Beinecke for their help in assembling this exhibition. 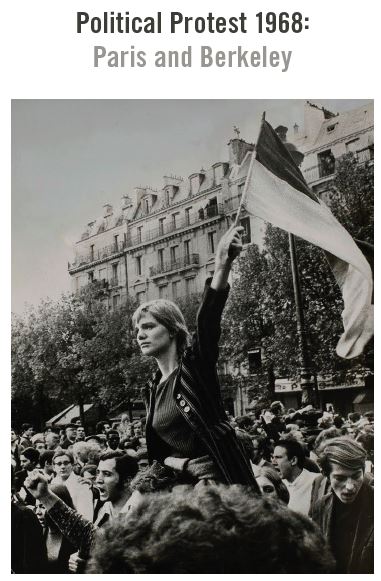