Can Rocks Feel Pain? The Bitter Landscapes of Palestine: photographs by Margaret Olin and texts by David Shulman

Toward the end of winter, the skies open and light comes raining down– on sheep, goats, shepherds, also on thieves, soldiers, and police.

These harsh desert landscapes are home to a small population of farmers and herdsmen, whose way of life is threatened with extinction. We want to show those who have not entered this world what it is like to live its reality. To make palpable the experience of being transformed from a mere outsider to someone who, simply by being with these people, is implicated in their fate.

We aim to bring the visitor into the spaces of the South Hebron Hills and the Jordan Valley, where in our experience it is not possible to remain indifferent. We ourselves have for years been deeply engaged with that reality, with the Palestinians and with their oppressors: Israeli soldiers, settlers, policemen. Our photographs and texts converse with all of the above.

We thus reference ourselves in conversations and reactions to events, and to the environment, verbally and visually, making clear our own point of view as it evolves, occasionally eliciting eye-contact or a gesture from a soldier or settler.

These pictures were taken between 2014 and 2019. Both of us are long-time volunteers in Ta’ayush, Arab-Jewish Partnership, a grassroots peace and human rights organization active in the areas we have mentioned. We accompany Palestinian farmers and shepherds to their fields and grazing grounds in order to protect them from violent settlers. We help them harvest their crops, pick olives, and plow their fields. We’ve been involved in many dozens of land ownership disputes, following the rightful owners through the Israeli courts and sometimes forcing soldiers and police on the ground to obey the court’s decision. There are solidarity visits to communities living under constant threat of demolitions and expulsions.

Part of our responsibility and our hope lies in documenting what we have seen.

Photographs by Margaret Olin and texts by David Shulman, 2020

About Margaret Olin and David Shulman

Margaret Olin is Senior Research Scholar at Yale University, as well as the author of Touching Photographs, and the curator of Shaping Community: Poetics and Politics of the Eruv. Her current work centers on the visual culture of the occupation in Israel and Palestine.

David Shulman is professor emeritus at the Hebrew University. The author of Dark Hope, More Than Real, Tamil: A Biography, and Freedom and Despair: Notes from the South Hebron Hills, he is a regular contributor to the New York Review of Books.

David and Margaret would like to thank the following individuals and organizations: Gabriel DaSilva; Jen Morris; James Ponet; the Whitney Humanities Center, the Judaic Studies Program, the History of Art Department, the Institute of Sacred Music, and Council of East Asian Studies at Yale University;  Slifka Center; Guy Hircefeld, Amiel Vardi and the other members of Ta‘ayush; and especially the shepherds of the South Hebron Hills, the Jordan Valley, and their families.

This exhibition grew out of David and Margaret’s ongoing collaboration at touchingphotographs.com. More of their work may be found there. 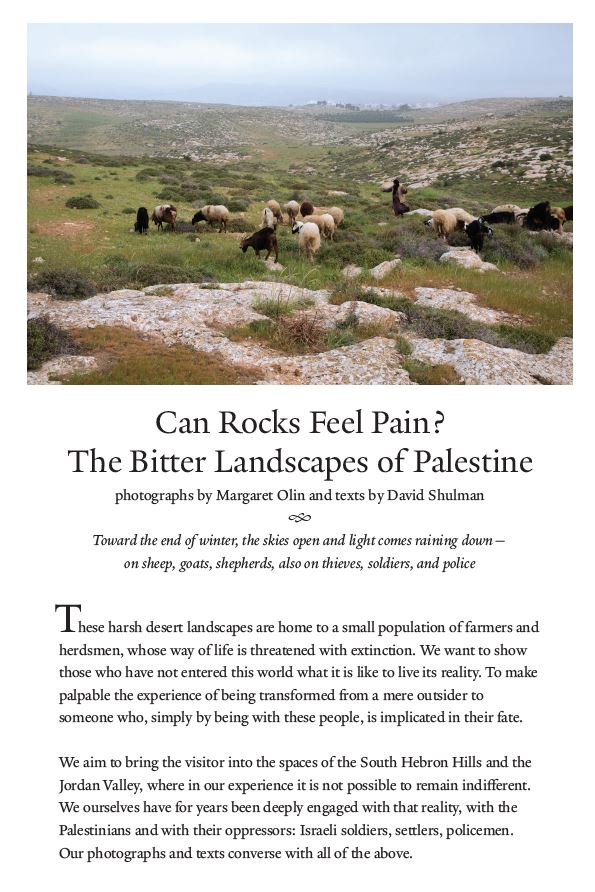 Thursday, January 23
Screening of The Law in these Parts, 2011, followed by a conversation with writer/director Ra’anan Alexandrowicz
Yale Law School, 6pm

Cancelled /// Friday, April 17 and Saturday, April 18
The Shadid Project: featuring two performances of Robert Myers’s new play based on Anthony Shadid’s life and last days reporting from Syria (WHC Auditorium at 7pm each evening) and a distinguished panel of journalists discussing the life and career of the two-time Pulitzer Prize-winning New York Times reporter (Saturday at 2pm in WHC Room 208).