Ding-Liang Chen is a first-generation Taiwanese researcher in the Combined Ph.D. Program in American Studies and Women’s, Gender, and Sexuality Studies at Yale University. He earned a dual B.A. in Economics and English from National Chengchi University and an M.A. in Foreign Languages and Literatures from National Taiwan University. His doctoral research aims to reconstruct transpacific histories of informatics, cybernetics, and digital infrastructures from the nineteenth century to the present era of cyberwarfare. Ding-Liang engages scholarship on the history of science and technology, settler colonial critique, and the environmental humanities to gesture towards an infrastructural critique of European, American, and East Asian empire, while calling into question the uneven production of knowledge in Anglophone academia. Prior to joining Yale, he served as an editor of world literature and non-fiction at the Rye Field Publishing Company and the Director of Research and Planning at the Taiwan-Asia Exchange Foundation (TAEF).

Pierre Forfert is a Ph.D. student in the Department of French. His current research centers on spa culture and balneotherapy in nineteenth-century French literature. He is interested in exploring the literary significance of spa towns through the prism of space and cultural studies as well as medical humanities. Prior to joining Yale, Pierre received a B.A. (2017) and an M.A. (2019) in English literature from Sorbonne Université. He also holds a master’s degree in Communications (2022) from the École des Hautes Études en Sciences de l’Information et de la Communication (CELSA). Sasha Karsavina is a Ph.D. student in Slavic Studies. She completed a B.A. in visual critical studies at the School of the Art Institute of Chicago, and pursued M.A. coursework in Slavic at the University of Illinois at Urbana-Champaign. Her research at Yale investigates figurations of technology and non-human subjects in Soviet speculative fiction. She is interested in extending this project to explore complementary depictions of human-technological hybridity in late socialist science fiction in China. In her spare time Sasha focuses on literary translation and learning Mandarin. Her translations and writings can be found in the Los Angeles Review of Books, Isolarii Press, The New Inquiry, PEN America, and Columbia Journal. A 2020 American Literary Translators Association travel fellow, she has presented work at ACLA, ASEES, the University of Hong Kong, Poetry Foundation, and Pushkin House. Sasha publishes under Alex Karsavin. Aishwarya Kazi is a first-year Ph.D. student in the Department of Anthropology at Yale. She received her B.A. in Sociology from Presidency University, Kolkata, and her M.A. in Development and Labour Studies from Jawaharlal Nehru University, New Delhi. She was also enrolled as a doctoral student of Social Anthropology at IIT Delhi before she joined Yale. Previously, Kazi had conducted ethnographic fieldwork in the Western Sunderbans of the Bengal Delta where she studied the everyday lives of islanders losing their homes to erosion. At Yale, she will examine how state-led development, environmental technologies, and the material and discursive effects of climate change come together to produce conditions of dispossession in a postcolonial context. She aims to trace the twentieth-century legacy of the deltaic region in the present day through both archival research and ethnographic fieldwork. Nathaniel LaCelle-Peterson is a first-year Ph.D. student in Film and Media Studies and Comparative Literature whose research orbits the intellectual history of “form” and the material cultures through which competing theories of form emerge. Focusing on the problematic materialities of extraction, Nathaniel seeks to better understand the matrix of labor, nature, and technology in a range of accounts of twentieth-century cultural history and critical and media theory. He is interested in broader cultural theorizations of form and aims to expand what critics include in intellectual histories of form. Previously, Nathaniel studied literature and media at Cornell University (B.A.) and the Freie Universität Berlin (M.A.) and worked as a managing editor for projects in the “Anthropocene Formations” group at the Max Planck Institute for the History of Science in Berlin.

Mikhail Moosa is a Ph.D. student in History. His research interests are in African and Environmental History, particularly in social histories of energy, electricity, and the environment in twentieth-century South Africa. He graduated with a B.A. in Politics, International Relations and Classics from the University of Cape Town and completed his M.A. in Development Studies from the University of Sussex as a Chevening Scholar. Prior to joining Yale, Mikhail worked as a public opinion and policy researcher at a non-profit think-tank in South Africa, where he presented his research at several international conferences and often discussed social policy in print and broadcast media. Marcus Yee is a Ph.D. student in History. Focusing on cities within the South China Sea littoral, his research proposes to look at the history of heat against the legacies of imperialism, international and national developmentalist agendas, and urban environmental injustice. He approaches heat as a multivalent historical phenomenon that involves the histories of climatology, cities, technology, environmental health, and the senses, in hopes of crafting parables that register the climate crisis as a crisis of inequality. He earned a B.A. from the University of Hong Kong (HKU), double majoring in History and Earth Systems Science, with a minor in Thai. At HKU he worked on a dissertation examining air-conditioning and thermohistory in Hong Kong. 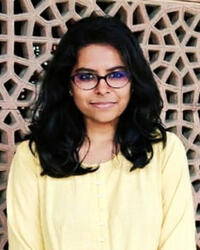 Meenakshi A is a first-year PhD student at the Department of History. Her research considers the intersecting histories of materials, technologies, infrastructures, and the environment in modern South Asia. Her research engages with these themes through the histories of cement and concrete in the region. She graduated with a BA (Hons) in History from Ambedkar University Delhi, before doing an MA and an MPhil in Modern History at the Centre for Historical Studies at Jawaharlal Nehru University. 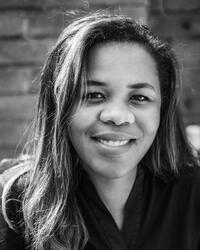 Allegra Ayida is pursuing her PhD in History at Yale. She holds a BA in History from Wesleyan University, an MA in World History from Kings’ College London and an MPhil in African Studies from Cambridge University. She is a historian of Africa who specializes in the longue durée history of Nigeria, in particular the Warri kingdom located in the Niger-Delta region of Nigeria. Her current research in environmental humanities focuses on oil and land ownership in the Niger-Delta region. The Warri kingdom, and the Niger-Delta as a whole, is a highly contested space, with longstanding tensions over land and resources. She hopes to use both historical and environmental perspectives to address contemporary concerns of the people in the region. Her website is allegraayida.com and she can be found on Twitter @AllegraHistory 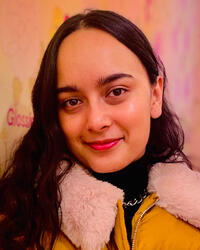 Shubhashree Basnyat is a first-year PhD student in the English Department. Born in Kathmandu, Nepal, Shubi received her BA from Williams College, where she majored in English and earned Highest Honors for her thesis, “Kathmandu,” a celebration of the expansive and creative relationships indigenous communities have with urban space in Nepal. Shubi has an MA in Postcolonial Studies from SOAS, University of London, where she also served as a reviewer for the graduate student journal Decolonial Subversions. Her MA dissertation examines women’s narratives of illness in Nepali fiction. At Yale, Shubi hopes to work at the emergent intersection of disability, illness, and environmental studies, while remaining rooted in postcolonial studies and feminist and queer theory. In her free time, Shubi is learning to rest, meditate, and cook. 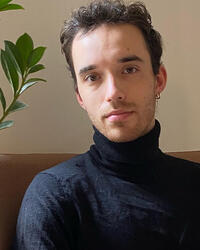 Dante LaRiccia is a PhD student in History with a particular focus on global and transnational histories of the environment. His current research centers on a diverse array of American development organizations and their variegated epidemiological and ecological incursions into the broader Western hemisphere. Prior to joining the Yale Department of History, Dante earned an MA in Global History from the Free and Humboldt universities in Berlin, where he studied on a German Academic Exchange Service (DAAD) scholarship. His MA thesis examined the convergence of two crises—in energy and international development—during the 1970s. As an undergraduate, Dante completed majors in History and Politics at New York University, where his thesis earned highest honors and he graduated cum laude. 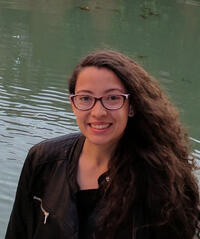 Camila Marcone is a first-year doctoral student in the Program in Medieval Studies. Her research is focused on environmental history in late-medieval and early modern Iberia as well as the translation of medieval environmental practices to early colonial Latin America. She is currently exploring these topics through a comparative analysis of medieval and early modern hunting manuals. Camila’s work has been featured at conferences organized by the Renaissance Society of America, Princeton University, and the Schoenberg Institute of Manuscript Studies. She is the daughter of Peruvian immigrants and hails from New Jersey. 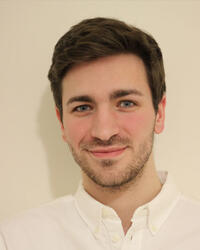 literature from Sorbonne Université, as well as an MA in arts, languages, and literatures from L’École des Hautes Études en Sciences Sociales (EHESS). His first two master’s theses dealt with the relationship between the female body, gazes, and images in the 1950s and1960s, in works by Marguerite Duras, Sylvia Plath, Annie Ernaux, and Simone de Beauvoir. His last master’s thesis analyzed body images in Charlotte Delbo’s trilogy Auschwitz and After.

At Yale, Julien hopes to continue working on the vulnerable body, especially in the wake of environmental and industrial disasters, visual studies, feminism, and gender studies in twentieth- and twenty-first-century French literature. As a fellow at the Whitney Humanities Center in Environmental Humanities, he intends to include the study of other forms of life, ethics of care, and ecocriticism in his research. 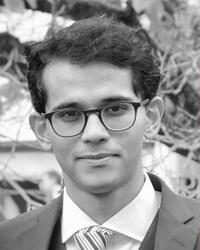 Harshavardan Raghunandhan is a student of South Asian and environmental history with interests in late Cold War regimes of development and the nature of ecological dissent against them. Harsha is especially excited about new approaches to energy, materials, and natural resource histories; he hopes to integrate approaches to such subjects into his own work. He is also interested in the ways in which we can reconfigure conceptions of moral economy in light of ecological crises. 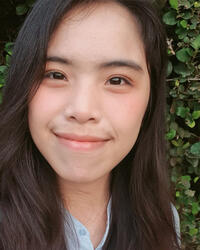 Nellie Yang (楊婷) received her BA in Chinese Literature from National Taiwan University and worked for a year in the cultural promotion industry prior to starting her PhD studies at Yale. Her research interest lies in fictions of the late imperial period, particularly their intersection with natural history and their imagination of the exotic. Having studied Manchurian, Tibetan, and Mongolian in college, she is also interested in investigating the literary embodiment of the relationship between Zhongyuan and the peripheries. 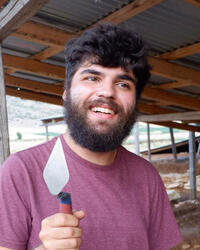 Parker Zane is a PhD student in Assyriology. He received a BA with Honors in Egyptology and Assyriology (Assyriology track) and Archaeology and the Ancient World (Egyptian and Near Eastern Archaeology track) from Brown University. His bachelor’s thesis focused on the role of clouds in the astral sciences of Mesopotamia. His primary interests include the intellectual history of ancient Iraq, human-environment relationships, and the archaeology of Southwest Asia. He is also interested in writing systems and duck decoys.