Here at the Whitney Humanities Center, we are very excited to be part of the new Humanities Quadrangle. But, although recently reimagined and renovated to function as a humanities hub, 320 York Street has a long history of housing humanities departments. We spoke to a former Chair of the History Department and Dean of the Graduate School, Jon Butler, about his experiences with 320 York Street. 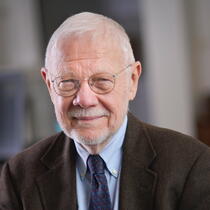 We’re so happy to talk to you about 320 York Street, a building you know very well! Please introduce yourself to our readers.

I am a historian of American religion and was the Howard R. Lamar Professor of American Studies, History, and Religious Studies from 1985 to 2012, when I retired to Minneapolis. I chaired American Studies and History for five years each and served as the Dean of the Graduate School from 2004 to 2010. My books and articles mostly focus on the colonial period and early nineteenth century, but a new book probes twentieth-century urban religion: God in Gotham: The Miracle of Religion in Modern Manhattan (Belknap Press of Harvard Univ Press, 2020).

What is your first memory of the Humanities Quadrangle (once HGS)?

My first HGS memory is almost a non-memory. It occurred, or barely occurred, when I came to give a job talk during the 1984-1985 Yale strike. Originally scheduled for 211 HGS, the talk was moved to the then Jewish Community Center on Chapel Street. Faculty and students were very welcoming, and if they seemed a bit nervous about HGS picket lines, they weren’t nearly as tense as I was about my talk, a Midwesterner from a public university who’d never even visited an Ivy League school. After my talk ended, we walked back to HGS where the picket line had disappeared. So, before the then inevitable Mory’s dinner, we dallied in HGS. It seemed very grand. But to a Midwesterner, it also seemed worn, unkept—East Coast dirty.

You had an office in the old HGS building for many years. I lived there as a graduate student for one year and I have a distinct memory of snow somehow piling up inside my closed window in my room—and not melting. What was your experience?

I had the opposite experience, of sorts. When I arrived at Yale in the fall of 1985, I was given a temporary office on the third floor of HGS above the York Street entrance. It looked like an import from East Germany to demonstrate the failures of Communism. Peeled paint looped down from the ceiling of a hallway lit by one bare bulb at the end of a fuzzy 1930s electrical cord. By December the hissing steam radiator transformed the office into an oven. You unlocked the door, darted in, pushed open the leaking lead glass windows, then waited for the cooldown. Subsequent offices were better, if not by much.

I hear you requested some updates to the building before accepting the position of Chair of the History Department! What did you have done and why was this necessary?

When President Richard Levin unexpectedly asked me to chair the History Department in 1999, I blurted out, “Well, I can chair the department, but I won’t chair a pigpen.” He laughed, then asked, “What do you have in mind?” Over the summer, university staff emptied the History offices, painted, sanded floors, then moved in new desks, tables, and chairs. If the work was purely cosmetic and didn’t touch the electrical and heating systems, it created refreshed, respectable offices, a plus for everyone, especially the History staff.

The idea of reimagining HGS as a Humanities building is about helping build communication between disciplines. What kinds of collaboration do you hope this new building will make possible?

How I would love to tour the thoroughly reimagined and reconstructed Humanities Quadrangle! If my elegant Graduate School dean’s office has been recast as a staircase to a vividly reimagined lower floor, it’s disappeared in the service of creating a vibrant mass for humanities faculty and students too long dispersed. Encountering multiple humanities departments by walking down hallways, not to other buildings, and creating abundant graduate student study spaces, previously unavailable, unfold exciting opportunities for long distinguished disciplines ripe for new adventures. Congratulations to the faculty and student planners, architects, engineers, construction crews, craftsmen, craftswomen, and deans and donors who’ve brought this off.

I’m excited for all of you!

Clio Doyle is a postdoc in the English department at Yale. She works on stories about the invention of agriculture in medieval and early modern literature.